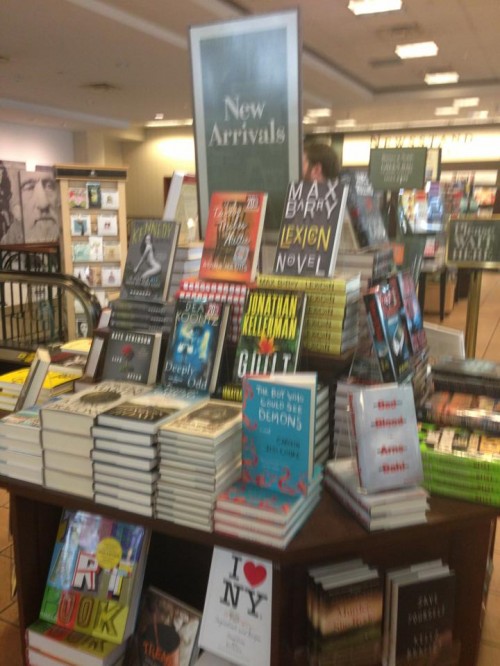 First of, thank you to all of you who have taken pictures of BOY on US shelves.

Anyway, keep the pics coming, they make me so happy.

So this blog post is loooong overdue. Well, maybe not so much: I did promise you video diaries during the recording of the audiobook for THE BOY WHO COULD SEE DEMONS but I was so focused on, you know, Anya’s narration (and the many accents I hadn’t realised I’d need to perform – as you’ll see…) that I just didn’t have time to edit.

But here we are! Wait, let me go back a bit in case you missed a blog post or two. So. A while back I heard that Random House Audio had bought audio rights for the novel, at which I squeed I lot. THEN, after some contact with the producer, I was asked if I would like to narrate Anya’s part. I squeed some more. And said yes. I was secretly hoping I’d get to fly to Los Angeles for the recording sessions (and secretly hoping that I wouldn’t have to, given how impractical my being on the other side of the world would be to my children) but as it turned out, Skype is awesome. Bruce Mann, a lovely man from the UK and based in LA, was able to direct me during the sessions.

So without further ado, here’s the little movie I put together:

I was stoked to hear Alex’s part – narrated by Bruce. Have a listen to the first part of the audiobook and tell me what you think. Does this sound like Alex to you?

Boy Who Could See Demona_TBR-1

At the weekend I was excited to see cool reviews for the book in both THE NEW YORK TIMES and THE BOSTON GLOBE – both on the SAME DAY. I couldn’t believe it. It was like US review weekend for the book.

Last but not least, don’t forget my competition for a UK-based reader to win a copy of the (scrumptious, delectably hardback) US version of BOY. All you have to do is LIKE and SHARE my Facebook Author page. I’ll select a winner at random on 1st October 2013.