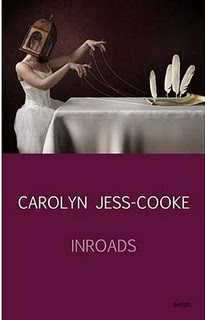 Shortlisted for the London Festival Fringe Prize for the Best First Collection of Poetry 2010.

This debut collection from Seren, Inroads, showcases a startling new talent. Carolyn Jess-Cooke has a sophisticated poetic intelligence as well as a great sense of fun.

The opening piece, ‘Accent’  where ‘stowaway inflections and locally-produced slang/have passports of their own’ is a praise poem for the versatility and joy of language, “The way sound chases itself in tunnels and halls, the way senses fold memory…”.  This verbal fluency and dexterity are employed to offer us poems that are multi-faceted and often paradoxical. ‘Aeneas Finds Dido on YouTube’ is part satire, part tender re-enactment of the myth, featuring the most up-to-date media platforms.

After this playful start, a difficult childhood is evoked through metaphor in poems like ‘Music Lesson’,‘One Thousand Painful Pieces’ and ‘Bitten’, all the more heartbreaking for being indirect. Other high points are ‘Newborn’ with the apt description of a babe in arms being a ‘zoo of verbs/mewling, snuffling, pecking…’. This sweet realism again gives way to metaphor, in the strangely evocative ‘Dorothy’s Homecoming’ in a brilliant take on the classic film ‘Wizard of Oz’, the power of maternal love has turned into a ‘twister’.

Readers will enjoy discovering this striking and versatile new voice.

‘In such a lavishly varied and adventurous collection, it seems a shame to single out one poem in particular for praise. … Jess-Cooke is a poet of both achievement and promise; whose future work will be worth looking out for, but who also deserves to be read and enjoyed now.’ – Poetry Review

‘Carolyn Jess-Cooke’s debut collection, Inroads, covers plenty of ground in an impressive variety of styles. She writes with intelligence and (often) humour on themes that clearly have emotional resonance for her – family relationships, travel and love an is rarely predictable….as if each poem is a journey deep into a complex human or metaphysical mystery that won’t immediately reveal itself.’ – Magma

I failed, and the failing was great thereof.
I failed all the way to the sulphur cliffs of cynicism, then bungee-jumped.
I shot a hole in one in failure.
I failed and changed the course of history.
I failed admirably, catastrophically, unremittingly, relentlessly, perspicaciously, deliciously, spaciously, and with the dexterity of the common impala.
I did not merely stall, pause, or change my mind –
I failed, like any serious attempt at oil painting in a wind machine.
I failed, but the crops did not.
I failed in a field, and filed as I fooled.
I walked right up to failure, kicked it in the shins, and insulted its mother.
I fell in love with failure. We got married and raised a family of failures.
I failed to the sum of the square roots of any two sides of an isosceles triangle.
I failed in the key of D flat.
I failed my heart out, I failed until my lungs burned, my brain rattled, my skin flapped
like a rag against my bones and my tongue uttered only ‘failure’…
I failed, much to the regret of the management.
I went scuba-diving in failure, I camped under failure, I hiked to the summit of
failure, I painted the floor with superglue while failure was sleeping and when
it woke up…. I laughed.
I failed in several languages.
I added failure on Facebook.
I failed from caveman to Homo Sapiens.
I failed stupendously, outlandishly, biblically, savagely, juicily, Byzantinely,
heroically, intergalactically.
I failed in hard copy, fax, text, email, Skype, and podcast.
I failed to the soundtrack of James Bond.
I failed as magnesium is to water, as the Apocalypse is to a Saturday morning lie-in,
as Godzilla is to the streets of Tokyo.
I failed, and I failed,
but at least
I tried.