Roseberry Park on Marton Road in Middlesbrough is a £75 million state of the art flagship development which will provide mental health services for working age adults and older people, as well as treatment and care for people with learning disabilities, and adults with mental ill health who need to be cared for in a medium secure environment. 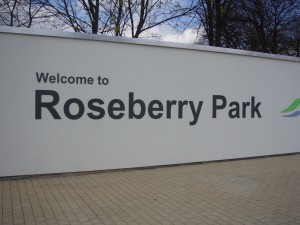 I was commissioned to write a poem which was subsequently set into a 700m ribbon of steel that meanders throughout the interior and exterior spaces of  the development. The project was designated the title ‘Finding Ways’, which I used loosely to explore the notion of discovery and getting back on track with one’s life.

I began this challenging project with a view to achieving three key aims: to produce a poem, or series of poems, that would enliven the new medical facility of Roseberry Park by commenting on the area’s heritage and the journeys that form a part of the medical facility’s purpose; to promote positive interaction and reflection within the residents and users of the facility through the poem; to produce a poem that adhered to the severe restrictions imposed by the building plans, at the same time as it appeared seamless and unforced.

My first approach was by researching the area. I soon discovered that Roseberry Topping had a huge history, reaching all the way back to Odin, the Nordic god of poetry (a nice touch as far as I was concerned), and that the hill had served many purposes. For instance, during the invasion of the Spanish Armada, fire beacons had been set alight on the hill to warn neighbouring towns and villages. From this emerged the line:

Fire beacons that waved their orange petals on the hills grow again as black buds of storm clouds, scraping their bulk on Odin’s Hill, trying to catch on fire…

Captain James Cook had frequently walked the hill during his youth. Folk tales linked his early walks with his developing desire for discovery and, of course, his later achievements.

Imagine when the Moors rippled across England
and Roseberry Topping rose like a green wave
under the feet of young James Cook,
scaling his dreams’ squalls against stiff walls of wind,
dreaming of what treasure might be found in horizon’s chest…

The shape of the hill also played on my mind, and I thought about Roseberry Topping’s significance within the contemporary context of Middlesbrough. To me, there were connections to be found here with music, art, and sculpture – all prominent features of a changing Middlesbrough.

My second approach was to make contact with some of the users of the existing facility. Throughout a series of workshops, I established the importance of language as a means of discovery, as a way by which connections and paths can be forged towards new destinations. Poetry in particular emerged as a crucial method for creating new journeys, inside the self and throughout the immediate environment.

The writing of the text for a public environment doesn’t end with the poem on the page – once I had a first draft, I had to tweak, reshape, and delete sufficiently in order to comply with a rather rigorous character count imposed by the length of the ribbon of steel. I wrote the poem before the construction of the facility was completed, so at times it rather felt like making a film according to a film soundtrack, instead of the other way around!

The proposed ‘journey’ of the steel ribbon cut through gardens, hallways, forked and twisted, bumped into seats, and had multiple endings – no small challenge for a writer! Instead of writing to a word count, as I was used to doing, I had to write to a character count – so in some cases, I had to replace one word with a shorter or longer one, or replace entire sentences. This process impacted greatly on my efforts to ensure that the poem remained seamless and meaningful, so I had to delve deep into my abilities. Above all, I had to keep in mind that this was a poem to be read whilst walking: as such, it has a much different feel than a poem one might encounter on the page or stage. Each word has a carefully considered purpose and relationship to the other components of the poem, and also interacts with the material used and the immediate environment. With regard to the latter, I had to be very conscious of exactly where a section of poem would be placed – in a hallway, near a door, or in a garden – as this relationship between context and text was very important to the finished piece, and ultimately to the reading experience.

Lastly, because the poem is intended to be read whilst walking – and I was aware that very few people would be reading the whole thing in one stretch, that they would instead be picking up a few words or lines here and there – the poem has a very flexible, quilt-like structure, bound together loosely by the theme of journeys. Voices come and go, images rise up and descend into narrative, strictly so that the reader can take with them a slice of the poem’s greater meaning and not feel that they need to read every word of the poem in order to experience it.

The director of Grit & Pearl, the commissioning company, had this to say about the completed work:

“Imagine asking a poet to write freely, but also to tell them
that a certain section had to be 67 letters long… or phoning
that poet up at 10pm to ask if a section could be rewritten to
fit around a manhole cover. That’s what I had to ask of poet
Carolyn Jess-Cooke many times, and each time I ‘broke’ her
poem she patiently stitched it back together.”