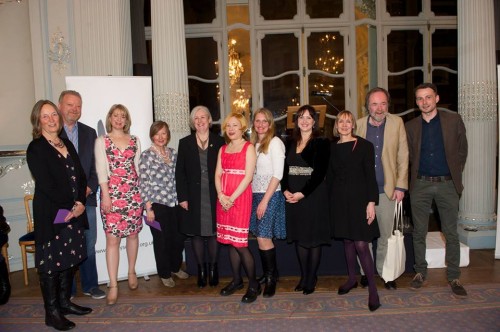 Last weekend I had the opportunity to attend a very posh award ceremony in a very posh club in Mayfair, London (did I mention that it was posh?) because my poem ‘Hare’ was commended in theNational Poetry Competition, or in other words got placed in the top ten out of 12,085 entries. I was bowled over by this news – received back in January – not least because of the number of entries received (it’s an international competition, despite the name) but because the poem I chose to enter was a kind of afterthought. I never imagined it would get placed… I was hugely pleased for Linda France, who took first prize – Linda lives in the north east also and she and I have done some readings together in the past. I’m delighted that the Poetry Society have arranged a celebratory reading for us both at the Newcastle Centre for the Literary Arts on 5th June.

Congratulations to all the winners. The poems can be read here.

Just ten days to go until the publication of my second poetry collection BOOM! (which is about motherhood; ‘Hare’ is published in it). My Writing Motherhood project is underway, with the first event happening on 13th April at the Wordsworth Trust and the launch of BOOM! at the Hexham Book Festival. On Saturday 14th June I will be performing at the Belfast Book Festival with Debi Gliori and Sinead Morrissey and on Sat 5th July I will perform with Hollie McNish and Rebecca Goss at the Ledbury Poetry Festival. I would LOVE to see you there!