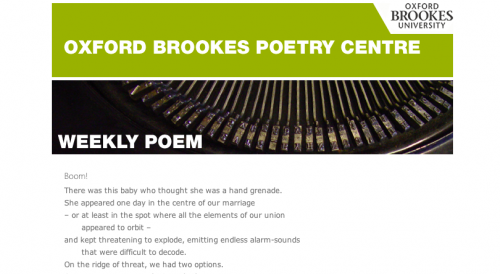 The lovely folk at Oxford Brookes Poetry Centre chose BOOM! as their poem of the week.

I subscribe to OBPC and enjoy finding their weekly selections in my inbox, so it was a very pleasant surprise indeed when I opened up this week’s email and found my own poem there. A nice precursor to the final set of Writing Motherhood events which are taking place in March (at StAnza, York Lit Festival and the Dylan Thomas Centre) and May (at the Swindon Festival of Literature). I’ll post more details about the dates and times of those events soon – or just click on the links.

It’s been an interesting project, this one, not least because motherhood is a very contentious issue – but the real surprise for me is how the contentions have tended to rise amongst women, and the reasons behind these contentions. At one event the question was raised why the project wasn’t ‘Writing Parenthood’, and why did it exclude men? We talked about how the project had been framed specifically as Writing Motherhood precisely because it’s not just parenting that is being addressed – motherhood is an issue relevant to women, and I particularly wanted to create more discussion about some of the ways in which mothers are represented, voiced and often silenced both politically and socially.

It has seemed to me that motherhood is often used as a discursive ‘frame’ by which sexism is rendered permissible (eg. the phrase ‘just a mum’ is seen as socially OK).

I also wanted to draw attention to the specific issues confronting female writers with children, who more often than not face barriers to writing – and whilst those barriers have typically been presented in terms of ‘the pram in the hallway’ (or in other words, childbearing resulting in compromised opportunities to write), I’m not satisfied that this represents the whole picture. For example, the Writing Motherhood events at the Wordsworth Trust raised the issues of women’s subjects that historically have been dismissed as ‘poetic subjects’ (Pulitzer prizewinner Sharon Olds’ of course was famously rejected by one magazine who told her ‘the true subjects of poetry are … male subjects, not your children’).

Writing Motherhood events at Durham Book Festival and Birmingham Literature Festival addressed gendered book covers – one of the writers talked about a book that dealt with serious women’s issues such as abortion, divorce and ‘empty nest’ syndrome, to which her publishers assigned a pink cover featuring floral wellies and teacups. Other writers have spoken out about book covers for books aimed at females old and young, and the discussion of this issue in the context of motherhood seemed very appropriate. Audiences at the events responded with their own stories and touched upon the emotional aspects of this experience as well, and how excited they were that, on the whole, there is a lot more literature and dialogue about motherhood and its impact upon women than has been available in the not-so-distant past.

I gave a reading recently and read some of the poems from my collection BOOM! – a member of the audience asked me during the Q&A if I was aware how polarizing literature on motherhood was to women without children. I flapped a bit in my answer. I think I flapped because the last thing I’d intended to do was polarise anybody – in fact, the whole point was entirely the opposite. But the question has stayed with me and bothered me.

My answer at the time was in relation to how poetry seeks to capture human experience, and whether it’s the experience of losing a partner or fighting a war or having a baby, the reader is not necessarily going to have personal experience of the subject matter. And I think that’s why I read – to learn about and feel what it is like to experience something that has never crossed my own path. I’m not sure the suggestion that such literature is polarising is valid – why then the question about literature about motherhood as polarising? I wondered if it was to do with the emotional contexts of infertility, but then does the literature of motherhood not deal with those contexts, and with miscarriage and loss? Is that polarising?

It may be slightly off-topic, but the Writing Motherhood project has also created conversation about breastfeeding in public (not least because Hollie McNish is part of the project, and her poem ‘Embarrassed’ is just incredible) – and what I’ve noticed is that the people I’ve come up against in this discussion, the people who told me breastfeeding in public is wrong, disgusting, shameful and so on, were women. I mean, WHAT??

I’d love your thoughts on this. Meantime, I’ve created a Twitter account called @writingmothers – do join in the conversation….